The fouling of coatings on underwater structures is a natural phenomenon that occurs continually in the marine environment.

On offshore structures marine fouling can increase the weight of the underwater structure. On the cooling systems of coastal plants it can obstruct grids, filters and pipe systems, and on sea-going vessels fouling of the hull can have a significant impact on speed and vessel performance.

The fouling of marine coatings can occur at the macro level by both animals (mainly barnacles) and plants (seaweed or algae) and also at the microfouling level by slime (bacteria and diatoms) with varying degrees of impact. 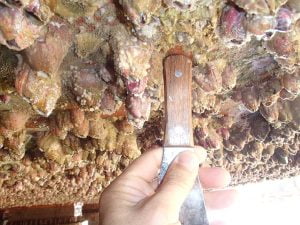 The fouling of marine coatings by barnacles

Unlike common coating defects such as crazing, cracking and blistering, only one standard is available to help in the estimation of the extent of marine fouling.

NACE SP21421 ‘Pictorial standard for underwater evaluation of fouling degree on ship hulls’ contains a set of photographs designed to enable more consistent quantification of the degree of fouling of the marine coatings during underwater surveys.

During dry dock inspections, the NACE guide can be used to estimate the surface area covered by fouling organisms. Supporting notes should be made on the types of fouling and, for example, the size of barnacles.

If the survey involves a claim under an antifouling performance guarantee, the affected area will have a percentage exclusion clause such as ‘visible macrofouling amounting to less than x% of the total surface area coated with the antifouling system is excluded’. In such circumstances, the percentage estimation should be used to assess whether the guarantee is activated or not.

When underwater photography is used to assess underwater coatings, care needs to be taken in the interpretation of any images provided.

For example, attention needs to be paid to scale, particularly as wide angle lenses can give a misleading indication of areas. In addition, there can also be some distortion of colour balance in underwater photographs which can lead to mistaken interpretation, including wrongly identifying areas of antifouling coatings as anticorrosive coatings.

A more detailed description of marine fouling types, classification and investigation, is provided in Fitz’s Atlas of Coating Surveys at https://fitzsatlas.com/