Generally, corrosion protection is provided by the ability of the cured system being able to slow down the passage of ions, oxygen and water down to the substrate.To meet this need, coatings manufacturers have developed technical products that have an optimum dry film thickness to provide maximum performance.

Under thickness of a coating system can lead to a high concentration of small rust spots which spread over the surface – so called rust rashing. Over thickness can lead to solvent entrapment and stress in a coating leading to adhesion failure in the form of blisters, delamination or cracking.

In the same way, applying coatings for maintenance or cosmetic reasons on top of previously applied systems may initially appear to have extended the life of the structure.

However, continuous re-painting of certain systems can eventually create a failure of the total coating system. This effect may not be evident for some weeks or months, but adhesion failures caused by internal stress generated by applying additional coatings is a common problem on maintenance contracts. 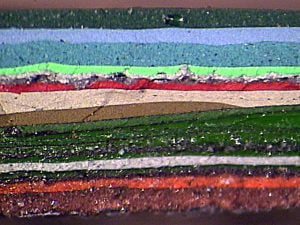 Depending on the specific industry, there are a number of standards which refer to the use of dry film thickness gauges and how they should be used.

To enable surveyors to do so, sophisticated electronic dry film thickness gauges are available which can take thousands of readings for the calculation of minimum, maximum, mean, standard deviation and other statistical data.

However, magnetic mechanical type gauges, without the capacity for data storage, may have to be used if the coating survey is to be conducted in an intrinsically safe zone or area.

For a more complete guide to Dry Film Thickness Surveys is included in Fitz’s Atlas of Coating Surveys at https://fitzsatlas.com/