In the second part of our series on how to evaluate rust on metal surfaces, we look at the procedures and other considerations covered in the Society for Protective Coatings’ reference booklet SSPC-VIS 2 (Publication No. 00-08).

Gauging the amount of rust on a painted or untreated metal surface can be a difficult process but SSPC-VIS 2 offers good guidance through the use of visual references. These steer the coatings surveyor through the practical assessment process and provide highly effective comparative images, which depict the percentage of rusting.

However, once an area or section has been selected, there are some critical procedures to be followed to comprehensively evaluate the impact of rust. The first is to determine rust distribution, which is carried out by comparing the selected area with the corresponding colour photograph or black and white image. The surveyor can use a visual comparison with reference photos to determine the percentage of rust on the surface. Electronic scanning techniques or other methods pre-agreed between contracting parties can also be used.

The grade is determined by the percentage of visible rust on the surface, as defined in Table 1 in the booklet. It is important to note here that if rust build-up is evident under the coating – for example, as a rust blister or as undercutting – that area should be included in determining the final rust grade.

The surveyor must also take into account other considerations when determining the percentage of surface rust. It is important to note that some finishes stained by rust (rust staining) should be discounted. In contrast, any accumulated dirt or other material that makes it hard to determine the degree of rusting must not be considered as rust.

Remember that certain types of dirt containing iron or iron compounds can cause surface discolouration – this should not be mistaken for corrosion. Consideration should also be given to the colour of the finish coating in evaluating surfaces. A light surface that contrasts with the rust may appear to have a lower rust grade than a similarly rusted surface with a colour that blends with the rust. The area or item evaluated, the types of rust distribution, the presence of rust blisters (if applicable) and the rust grade must all be detailed as part of the final evaluation report.

Preventing rust is important for steel structures. Without proper protection, surfaces will start to rust over time and will fail sooner or later, depending on the location and atmospheric conditions. Therefore, it’s critically important to evaluate the degree of rusting as quickly and effectively as possible to safeguard structural performance. Following the Society for Protective Coatings guidance will go a long way to helping secure this. More at Fitz’s Atlas of Coating Surveys https://fitzsatlas.com/ 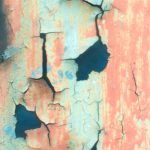 Evaluating the degree of flaking